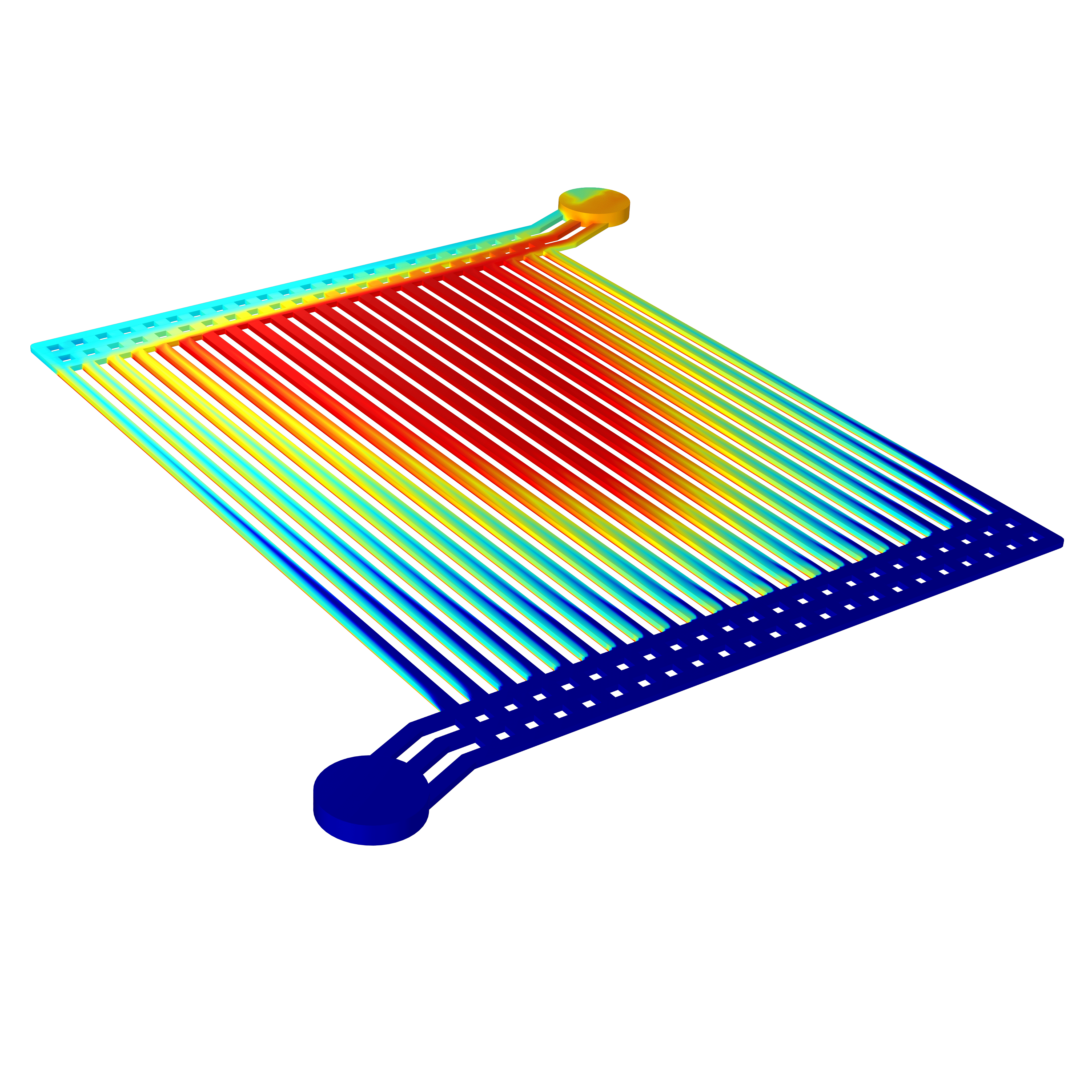 Fuel Cell and Electrolyzer Modeling for Design and Performance Analysis

As with every product in the COMSOL product suite, multiphysics capabilities are built into the software for including multiphase fluid flow, heat transfer, thermodynamics properties, and more.

What You Can Model with the Fuel Cell & Electrolyzer Module

The Fuel Cell & Electrolyzer Module features predefined formulations for the most common types of hydrogen fuel cell, accounting for the electrodes, electrolyte, as well as current collectors and feeders. Examples of fuel cell types that can be modeled are the PEMFC, AFC, PAFC, SOFC, MCFC, and high-temperature PEMFC, to mention a few.

Modeling and simulation can be used to predict the current and potential distribution, the chemical species distribution, and the temperature distribution in a fuel cell. In this way, the cell can then be designed for the best possible utilization and operation for a given set of conditions. Important aspects are the removal of water and avoiding nonuniform utilization of the cell, which may result in poor performance and decreased lifespan. Additionally, microscopic aspects of the gas diffusion electrodes and the active layers can be studied, such as catalyst loading, particle size distribution, and bimodal pore distribution.

Analyses cover 0D, 1D, 2D, and 3D during transient or steady-state operation. The physics-based models can also be formulated in the frequency domain to simulate impedance spectroscopy experiments.

Oxygen mole fraction in a section of the channels and the gas diffusion electrode in a proton exchange membrane fuel cell.

The lowered costs for wind and solar power has led to a larger production of electricity in remote areas, where grid capacity may be limited. This means that the grid may not be able to receive all the electric power when the wind blows and the sun shines. Electrolyzers can be used to locally produce hydrogen from electricity through water electrolysis. This hydrogen can be stored and converted back to electricity using fuel cells, when there is a demand and capacity in the grid.

The design of a water electrolyzer is similar to that of a hydrogen fuel cell, with the difference being that in comparison to a fuel cell, the current runs in the reverse direction, the cathode is the negative electrode, and the anode is the positive electrode. The models within the Fuel Cell & Electrolyzer Module involve the description of the gas diffusion electrodes, the active layer, the electrolyte separator, and the bipolar plates with the channels. Models can be defined at the unit cell as well as the stack level.

As with the fuel cells, the models are physics-based and cover 0D, 1D, 2D, and 3D, for steady-state and transient operations.

Current density distribution in a plane in the middle of the electrolyte separator and flux streamlines of hydrogen in a solid oxide electrolyzer cell. The color of the streamlines represent the hydrogen partial pressure. The current density decreases in the regions where the concentration overpotential for hydrogen evolution increases.

The functionality of the Fuel Cell & Electrolyzer Module is not limited to water electrolyzers. Any electrochemical cell or electrolyzer can be modeled. This includes the ability to describe gas evolution and laminar multiphase flow. For systems such as chlorate electrolysis and the chlor-alkali membrane process, the module can be combined with the CFD Module to also treat turbulent flows.

Features and Functionality in the Fuel Cell & Electrolyzer Module

The Fuel Cell & Electrolyzer Module contains detailed descriptions of the transport equations, chemical reactions, and electrochemical reactions that occur in fuel cells and electrolyzers. The software formulates the model equations for gas diffusion electrodes, pore electrolyte, electrolyte (separator), and bipolar plates, which are the main components in these systems. This implies modeling the cells in 0D, 1D, 2D, or full 3D during stationary operation, or for full transient experiments and operation.

The space-dependent simulations (1D, 2D, and 3D) can account for ohmic losses (primary); ohmic and activation losses (secondary); as well as ohmic, activation, and mass transport losses (tertiary). For tertiary current distributions, it is possible to define systems with supporting electrolyte, dilute electrolytes, and concentrated electrolytes. The transport equations, the Nernst–Planck equations, can be combined with the electroneutrality condition or Poisson's equation.

The electrode kinetics can be defined using the Tafel equation, the Butler–Volmer equation, or with arbitrary functions of the overpotential and the concentration of chemical species. Multiple reactions may be defined on an electrode surface (an arbitrary number).

The current distribution interfaces can be used in combination with porous electrodes, gas diffusion electrodes, and planar electrodes.

Current distribution on the surface of the mesh anode in an electrolyzer with planar counter electrodes. In this case, the Nernst–Planck equations are used, assuming a supporting electrolyte. The transport by diffusion, migration, and convection of the reacting species is taken into account.

The current density distribution in the electrolyte in an SOFC is strongly correlated to the oxygen mole fraction in the gas channels (top channels) while the hydrogen electrode contributes with a small amount of concentration overpotential (bottom channels). The H2 Gas Diffusion Electrode Reaction feature allows you to define the kinetic parameters for the electrode reaction.

The heat balance in a self-breathing PEMFC is defined by adding electrochemical heating in the Multiphysics node in the model tree. The selection of the Hydrogen Fuel Cell interface and the Heat Transfer interface in this node automatically defines the electrochemical heat sources and heat sinks.

Modeling gas diffusion electrodes (GDEs) in the Fuel Cell & Electrolyzer Module is very straightforward. The transport equations in the gas phase and in the pore electrolyte are automatically defined in the user interface based on the boundary conditions added. The software contains separate domain features for defining the hydrogen and oxygen electrodes. The main electrode reactions are predefined, but you can change the kinetics and add bi- and parasitic reactions.

The charge balance in the electrolyte (separator) and the pore electrolyte (the electrolyte in the active layer or in the GDE) are also defined. They are automatically coupled to the transport equations in the gas phase through the electrochemical reactions and Faraday's law.

Multiphase and Single-Phase Flow in Free and Porous Media

One of the specific phenomena in low-temperature fuel cells and water electrolyzers is the concurrent transport of liquid and gaseous water (steam). In fuel cells, the flow needs to drive water out of the cell as well, to avoid flooding of the electrodes. Similarly, in water electrolysis inadequate transport of the produced gas may render parts of the cell inactive. In both cases, it is important to model two-phase flow in the porous electrodes and in the open channels.

The content of the gas mixtures in the hydrogen and oxygen electrodes may vary for different processes and different operating conditions. The Fuel Cell & Electrolyzer Module contains a built-in thermodynamic properties database for hydrogen mixtures and oxygen mixtures. The hydrogen mixture may contain nitrogen, water, carbon dioxide, and carbon monoxide as additional species in order to model byproducts from reforming reactions in addition to hydrogen. The same additional species are available for the oxygen mixture. When the composition is selected and the reference partial pressures are defined, the software can compute the equilibrium electrode potential for the hydrogen and oxygen electrode reactions, thereby also the equilibrium potential for the cell.

The definition of the energy balance is built-in when using the Fuel Cell & Electrolyzer Module. Heat sources and sinks originating from electrochemical reactions, transport of ions and chemical species, as well as current conduction can be added automatically in a heat transfer analysis. Additionally, the thermodynamic database makes it easy to obtain input data for the simulations of thermal management of hydrogen-oxygen cells.

Every business and every simulation need is different. In order to fully evaluate whether or not the COMSOL Multiphysics® software will meet your requirements, you need to contact us. By talking to one of our sales representatives, you will get personalized recommendations and fully documented examples to help you get the most out of your evaluation and guide you to choose the best license option to suit your needs.

Just click on the "Contact COMSOL" button, fill in your contact details and any specific comments or questions, and submit. You will receive a response from a sales representative within one business day.