How Does a Charge Exchange Cell Work?

Neutral particle beams of varying energies are an important element in many applications, including medicine, the design of scientific instruments, and materials processing. In the quest to accelerate neutral particles to extremely high velocities, we can turn our attention to the role of a charge exchange cell.

A charge exchange cell refers to an area of high-density gas that is placed in the path of an ion beam. In this region, fast ions from the beam can undergo charge exchange reactions with the background gas. This causes the ions to become neutralized, which in turn creates a neutral particle beam towards the end of the cell.

Let’s break down this process further, beginning with a charge exchange cell filled with neutral argon. As protons are accelerated through this medium, they are able to pick up electrons from the available argon atoms. This combination generates a neutral hydrogen atom, which travels rapidly out of the cell, and a slow-moving argon ion. The probability of capturing electrons, however, is relatively small. Thus, many charged particles can still remain in the beam as it leaves the cell.

So how do we achieve a completely neutral beam through this process? One approach is to use a pair of charged plates to deflect the protons prior to the beam’s arrival at its target. Using simulation, we can investigate the role of the gas cell and charged plates in the neutralization process.

The Charge Exchange Cell model is used to carry out a beam neutralization process analysis. This model requires the Molecular Flow Module and the Particle Tracing Module.

The Charge Exchange Cell model features a cylindrical gas cell within a vacuum system. Neutral argon gas is provided by a shower head ring in the cell’s center. The shower head includes microchannels that control the cell’s neutral gas density, producing a high-pressure area within the instrument’s main vacuum system. The Free Molecular Flow interface is used to compute the number density and the pressure of argon gas within the gas cell. 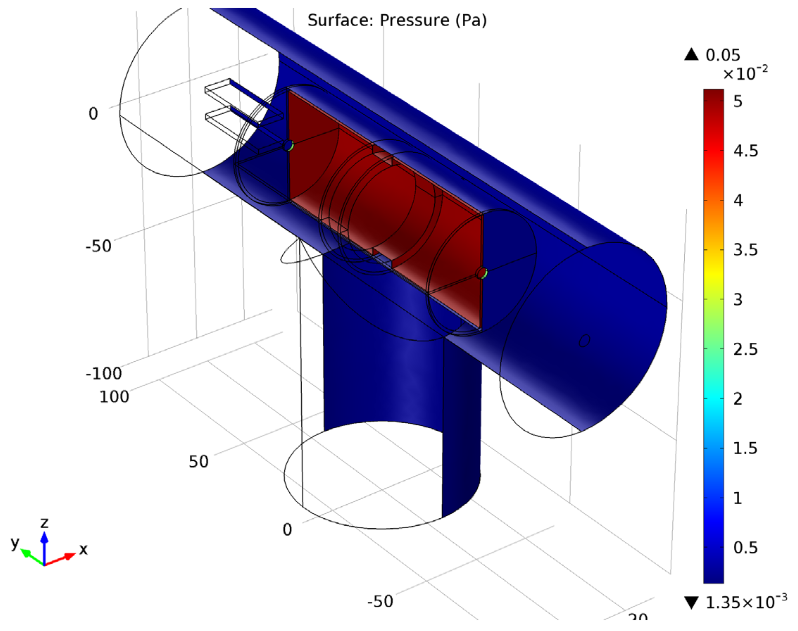 Surface plot of the pressure within the charge exchange cell.

In this example, the electrically charged plates are represented as two blocks. The upper plate has an applied electric potential of 200 V, while the lower plate remains grounded. The Electrostatics interface is used to compute the electric potential between the plates, which can then be used to deflect the ions.

To model the collisions of the incoming ion beam with the neutral gas, the Charged Particle Tracing interface is used. This interface includes an Elastic Collision Force that takes the gas density computed by the Free Molecular Flow interface and uses it to determine the collision frequency. 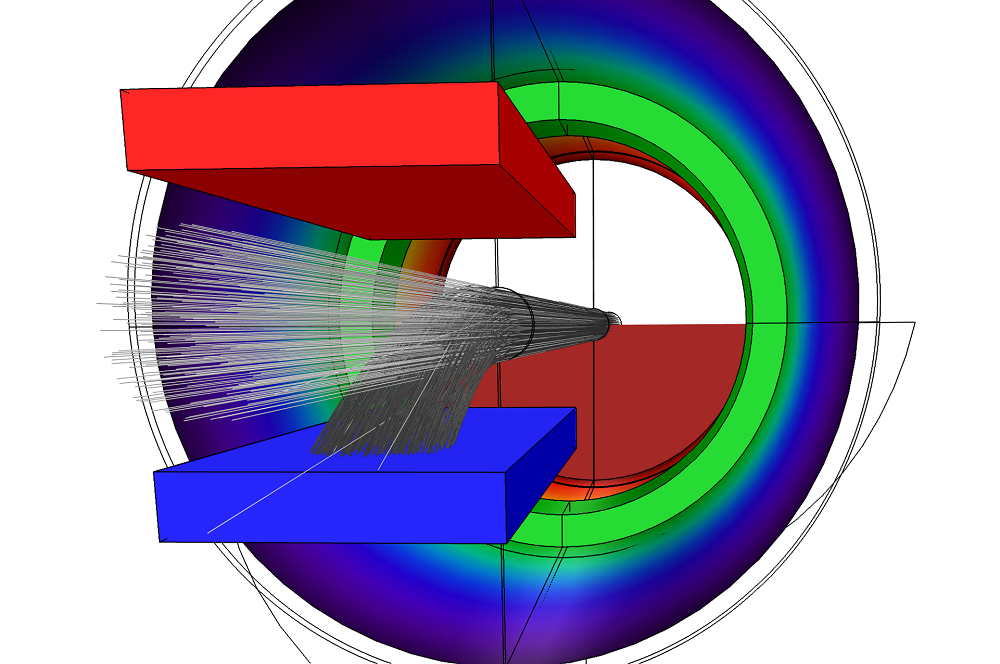 Particle trajectories within the model. This image highlights how some ions undergo charge exchange reactions before exiting the cell. 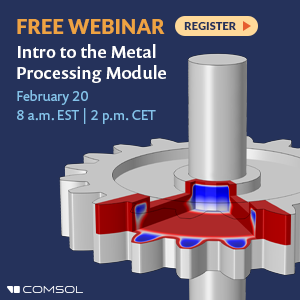 How to Use Numeric Ports in Your RF Analyses